Established in 2015, Hallowed Ground ProtoGrove is an Irish/Norse blended Druid grove based in Gettysburg, PA. As an ADF (Ár nDraí­ocht Féin) ProtoGrove, we are committed to providing a venue for public Pagan worship at which all who attend with good intent are welcome.

ADF Druidry is orthopraxic by nature, in other words, we are bound together by a common religious praxis as opposed to a common doctrine. In accordance with our organizational orthopraxy, we celebrate 8 High Day rituals per year, and follow the common ritual format (The Core Order of Ritual) while representing ADF at our public rituals. As an organization, our cultural focus is on Pagan period cultures that spoke Indo-European languages. This is a classification that includes most European cultures, some Anatolian cultures, and Indo-Aryan groups such as Iranian and Vedic cultures. Because these very diverse cultures are believed to have come from a common root, scholars believe that it is possible to not only discern common mythical themes between those cultures, but also commonalities in forms of worship. It is in the study of those commonalities of worship shared by the various Indo-European cultures that our ‘Core Order of Ritual’ format is based.

Because of this focus on commonalities, a  good many different types of Neopagans have found that they can rest quite comfortably under our branches. For some of those members, ADF is their only religious expression, but for others, ADF forms the part of a more complex religious picture.

Many Groves and ProtoGroves choose to focus on some Indo-European cultures more than others – as we do at Hallowed Ground ProtoGrove. Within ADF, this kind of cultural focus is referred to as a ‘hearth culture’.

Aside from that, we don’t bite; so if any of this sounds good, why not read our profiles and follow our Facebook page for details of our next rite?

We look forward to meeting you! 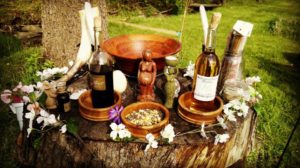 From the Ancestral Forge

Signup for Hallowed Grounds quarterly publication, “From the Ancestral Forge”, and enjoy scholarly works, articles and information right to your mailbox.